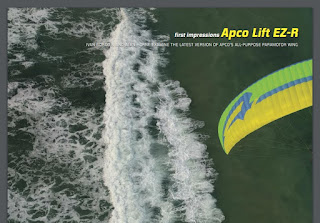 Our Apco Lift EZ-R review was published in Jan SkyWings Magazine. So, here we go.

Our team managed to get our hands on the new Apco-Lift EZ-R wing, the third generation of a well renowned and reputable wing. We were particularly keen to try it because we both fly the first generation of Lift wings and the time came to make our choice and to replace our wings with a new ones.

As it stands, both first and second generations of the Lift wings are considered to be one of the safest paramotor wings at the market. At the same time, these wings have quite a high top speed of 37mph with trimmers off and speedbar pressed out. This make these wings truly universal and suitable for the variety of pilots, from beginners to cross country professionals.

Second generation of Lift Wings (Lift EZ) got a bit slower and comfortable take-off and landing speed with no other major differences in comparison to first Lift generation and we were very much looking forward to find out, what has changed within the latest, third version of Lift.
When we were considering the new wings, with no hesitation, we put the list of three main requirements our team need – it is Stability (Safety), Speed, and Performance (good Glide ratio or effectivity) of the wing.
However, in my opinion, these three things usually does not come together. It is either safe and effective wing with low top speed or Fast, Effective but not very safe wing, or it is Stable and Fast but not very affective in terms of glide wing. The first and the second generation of Lifts were close to this third class of the wings and therefore I was a bit sceptic about real progress with new Lift EZ-R. Therefore, I was even more impressed after flying it.

In general.
When you look at the wings canopy and the lines, there is no much difference in to the old one. However, the risers are a massive step forward. They are slimmer and neater. New type neodymium brake magnets of quite a complex shape not only look fantastic but also do the job really well. Now you take the brakes and place them back without thinking. Personally I would prefer for the brakes to be a bit softer (there is a hard plastic insert inside) but it is a matter of personal preference indeed. At large, that is a great improvement to the old style risers.
The structure of the sheathed lines is still one of the most simple at the market and we pretty much appreciate this simplicity because of less issues during taking off from dodgy long grass areas when flying cross country. In contrary to those wings having sheathless lines it is much easier to control them and easy to look after.

Take-off and landing.
The take-off behavior is pretty much similar to school type wing. It has no tendency to overshoot and gives you the time to correct the mistakes if you make one. Take off speed is still one of the lowest in its class as well. This is very important not only for the beginners, just graduating the flight school but for us as a cross country team as well. Quite often, the take-off spaces at some secluded beaches are very limited and you want to be in the air as quick as possible.
Landing can’t be easier and straight forward as well. In contrary to many fast wings where you have to catch the moment of deep and intensive braking to get the vertical and horizontal speed right, Lift EZ-R response to braking is very clear and predictable? You can do the landing with trimmers either in close or in neutral position, and you do not need to get used to it. You just do it without thinking.

In flight experience.
From the “Trinity” of Speed, Safety and Glide ratio, Safety is the most important with no doubt.
We have made a few flights with Lift EZ-R prior to start writing a review and one of them was during quite a rough conditions with 6 to 8 meters per second (13 – 18 mph) wind and strong wind shift turbulence. Yes, that is an old good Lift character, very calm and predictable in turbulence with very moderate inputs from the pilot required. Moreover, in terms of the pilot’s comfort (I mean how much info is transferred to the harness) it is one of the most comfortable wings we ever have flown.
At the same time the wing is agile enough and wingovers and spirals are easy to perform and predictable as well. It is not so responsive to steering as Apco Force or NRG XC and this obviously reflects the calm character of the wing.  However, there is one tip, which we figured out from flying the first Lift generation, which is applicable to new Lift EZ-R as well in order to increase the agility further more. It is the combined use of the main and small brakes. Basically, to get the most of the wing’s agility you can use the small (ear’s) and the main brakes together at the same time. Be aware that this combination must be used with trimmers fully closed or in neutral only.
Safety notice – because of the Reflex wing profile it is highly recommended to use only small brakes whilst the trimmers are open and speedbar pressed out.

Speed check.
With being loaded up to the top of it’s recommended limit (140kg in flight weight for Lift EZ-R S size) we had measured 21 mph speed with the trimmers closed, 27 mph with the trimmers fully open and 36 mph with the trimmers open and speedbar pressed out. This is very close to what is stated by the manufacturer and in my opinion covers 90% off the applications excluding Slalom. Of course, anyone can get the higher speed with using the small size high performance wings designed for competition flying. However, we as a team do not support the tendency to go for a very small and fast flying wings because Safety is a primary matter in cross country flying.  We reckon that the balance of Safety and Speed offered by this Wing is outstanding. Just to add, the speedbar requires moderate effort for pressing out and holding. This is definitely far much better than the first generation of the Lift speedbars.

Performance
Here came the main surprise for us. In our opinion, the main indicator of the wing’s performance is the power, needed to keep it in the air. The main indicator of this power is the RPM of the motor. In comparison to my Lift M (28m) the new S size (25.8m) of Lift EZ-R requires far less power in horizontal flight. The difference is as much as 1000 rpm and this is drastic contrast to the old series, especially when the speed bar is pressed out. Well done APCO. Less fuel consumption means longer cross-country flights and less weight on your back.

Conclusion.
The third generation of Lift wings managed to surprise us indeed. The same uncompromised safety and wide speed range comes in combination with so much better performance. In our opinion, the main value of this wing is the very right balance of Safety, Speed and Performance. Safety deservedly should stand in a fist place in this trinity. Having the wide speed range with top speed of 36mph, it definitely suits the requirements of variety of pilots from beginners to those flying cross-country and at the same time it gives you an extra piece of mind in terms of comfort and safe flying.