Following our report on 17 000 feet flights we did earlier we were often asked a few questions on the UK Air Law and particularly two questions:
1. Is it mandatory to use the transponders when flying at and over FL 100.
2. What are the rules for paramotors flying under VFR/IFR (Visual Flight Rules /Instrumental Flights Rules).


In order to clarify it we  have been in contact with CAA (Civil Aviation Authority) and BHPA (British Hang Gliding and Paragliding Association) it all became quite clear.

Here is the response concerning using the transponders from the General Aviation Unit of CAA:

Definition - Paramotoring is Paragliding with an auxiliary motor attached to the pilot. The CAA has defined this recently legitimized form of powered flight as a foot launched self-propelled Hang glider (SPHG). This does not mean that Paramotors are deregulated, as they still have to comply with all U.K. aviation law/rules of the air.
AS a general rule for all normal flight in open FIR no transponder would be needed.  Although FL100 is a high level  for paramotor flight it would only need a transponder if operating outside a non SSR gliding area.  So essentially if you are operating within a non SSR gliding area you won't need to have a transponder.

So, In one world – NO, we do not need the transponders in F and G lass airspace no matter what altitude we fly. (FIR – Flight Information Region, SSR – Secondary Surveillance Radar). And the second fact – Yes – we are classified as a type of Glider.

Here is the relevant extracts from 1.5 GEN of the AIP which is the definitive source of for all airspace equipment requirements:
5.3.4 Exceptions (to mode S transponder)
5.3.4.1 The requirements at sub-paragraphs 5.3.1 (c) to 5.3.1 (f) shall not apply to:
(a) Gliders, including self-sustaining gliders and self-propelled hang gliders, and self-launching motor gliders except;
(i) Where operating above FL 195 outside airspace notified as TRA(G), or
(ii) Where operating below FL 195 outside notified Non-SSR Transponder Glider Areas.

Although we do not need to use the transponders here is an advice from CAA and BHPA regarding high altitude flights:
Our advice here is most definitely keep all surrounding ATC informed when planning to fly at those higher levels.

Gentlemen, I would suggest – do not hesitate to contact your local ATC and ask if they want to know what you are doing.

2. The second question was on VFR / IFR (Visual Flight Rules /Instrumental Flights Rules). In simple worlds - can we go through the clouds legaly.

Prior to coming to the question itself,
I truly believe that it is silly and dangerous to fly in the cloud. It is nothing interesting inside and It is not safe for you or any other pilots.

What do you think about this photo from our recent flight to Wales? Are we flying under VMC or IMC here? 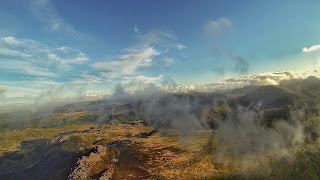 If you think that these are Visual Meteorological Conditions you are wrong. It is Instrumental.
Because of the VFR minima difinition for Class G airspace for 3000ft – FL100 which is:
- 5 km flight visibility
- 1500m horizontally from cloud
- 1000ft vertically from cloud

So strictly speaking, when I approached and went through this small tiny cloud (Air Law has is not recognizing “BIG” and “tiny” clouds) I was flying under IMC.

So, is it legal?
Two fundamental facts are:
1.   We are classified as Gliders.
2.  In G class airspace both VFR and IFR flights are permitted. No clearance needed as it is not controlled airspace.
3.  Gliders are permitted to fly IFR.

At this point one can think that he can legally fly under IMC and fly through the cloud. Moreover, a lot of paragliding instructors in the UK think that it is silly, dangerous but still legal.

I personally do not think it is. The reason for it is Part 10 of Schedule 6 of the Air Navigation Order 2016 and Regulations which sets the minimal list of equipment for the aircrafts flying under IFR:
-    Magnetic heading
-    Pressure altitude
-    Indicated airspeed
-    Vertical airspeed
-    Turn and slip
-    Attitude
-    Stabilized heading

I do not think that anybody has the slip indicators installed at his paramotor and I do not thing there is an exception made specially for us. Moreover, all the equipment to be used for flying IFR has to be approved by CAA.

This is the variometer I am using during the flights to identify the altitude and vertical airspeed.

It is a nice and reliable device but it is not approved by CAA so technically it is not legal to use it for IFR. And again - technically, we can not comply to minimum IMC equipment requirements. Thats my opinion.

In conclusion - although there is no clear answer if there is a chance for us to legally fly under IMC I believe that nobody is interested how you are flying, where and what model of altimeter you have since you are not doing the silly things. In one sentence – do not fly through the clouds, in restricted airspace and over the public, do not endanger yours and others life.

If you have any doubts where and when you can fly – do not hesitate to contact BHPA or CAA. They are really helpful and keen in keeping us all safe.

So let us enjoy our beautiful sport and keep safe.